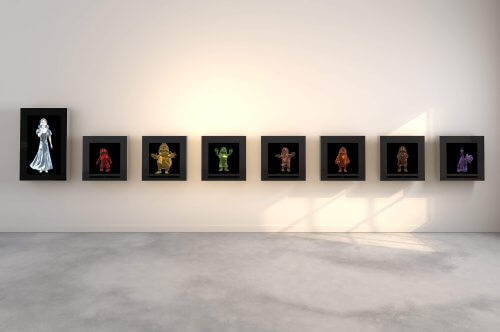 Snow White And The Seven Dwarfs – Interview With The Artist | Priveekollektie 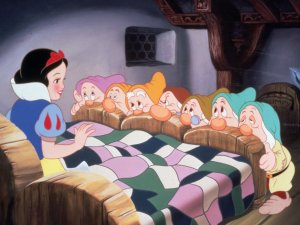 Were you able to reference the original Disney film when creating your pieces?

I was honoured to be granted access by Disney to their Disney Animation Research Library Archives of original art from the film. I was able to see original artist sketches from the 1930s and use this as a basis of my work. It has been an incredible process, one that has really pushed my full imagination and storytelling techniques to the limit. Re-imagining these iconic characters has only really been down to the most privileged access of working with the original archive at Disney, and their full support along the way.

Priveekollektie is a gallery that operates at the highest level of art and design across the globe, they offer complete patience with time and investment and a far reaching understanding on the brave design choices I undertake for each of my artworks. Thus, have become crucial to every project. For this artwork in particular they were especially supportive in their acceptance of my personal design choices for the characters and animation.

How does this piece fit in your own and Priveekollektie’s body of work?

Priveekollektie is known for the innovative new medias of the artists they represent and exhibit with, but they also have a strong history in representing portraiture and photography.  My new artwork sits within a great context of others artists and designers at Priveekollektie. Over the past four years they have supported me in pushing the envelope on new media artworks – and in particular their confidence in the new technological territories that my artworks lead to.  With this new work they were incredibly supportive over the year it has taken to go from concept to artwork. Of course, they were equally excited at Disney being interested in my work and have been integral to garnering interest in the art world about this new endeavour.

The interactivity this work offers continues my passion with this style of making and Priveekollektie have come to support this fully. This work has come to sit within the body of work that offers unique multifaceted interaction, which I will continue to incorporate in my works, as I truly believe it offers boundless and timeless artworks that are wholly defined by the user. 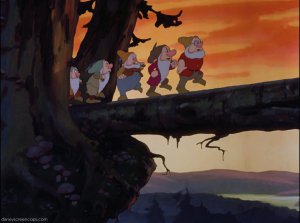 What emotions do you believe Snow White and the Seven Dwarfs will provoke in people interacting with it?

I have attempted to capture the magic and excitement that is present in all of the Disney works. To me personally, this new work evokes strong emotions, as it will be a constant reminder of the fun I had as a child. The characters and animations are magical and timeless and have been watched by all around the world. These shared childhood experiences are important to maintain, especially now that I have my own child of whom I can pass these memories onto. I get a deep pleasure from introducing her to the very characters I enjoyed to watch as a child. I hope that when people interact with this work they are taken back to fond memories of their childhood, like I am and are excited by my distinct approach to Snow White and Seven Dwarfs.

What do you think you add (to the story) with this new version of Snow White and the Seven Dwarfs?

The story of Snow White is universally known and the characters are embedded in an unforgettable shared history. Therefore, it was important to me to respect the magnitude of their presence whilst adapting it with my own personal twist. I separated the characters so they had their own screens; this was important to allow them to have their distinct space and let their own personalities shine through as each have their own distinct unique characteristics. They soon became a live study of the characters rather than a complete copy of the beloved film characters, as I decided to move away from the linear narrative of the film version. Instead, I offered a live animation afforded to me by my bespoke material palette and the utilization of new technologies, which I used to re-interpret the characters into my vision. The metallic animation is the defining element to the design as it offers a beautiful chrome reflective finish to each. This in turn allows a reflection of the viewer into the artwork, which has been a important component to some of my recent works including Vanity Mirror (2014), Four States (2014) and Ice Angel (2012).

What makes this work special?

The characters themselves are a departure from their own pre animation form as I was able to use technologies and techniques that are innovative and modern. The work itself, like previous interaction pieces of mine challenges the way you look at art and how the user can come to define the work through their own presence. This double reflection visually reinforces their special nature by demonstrating its ability to challenge how you visually perceive art and how the user can come to define its meaning. In this case, I think Snow White and Seven Dwarfs offers a unique take on the characters, which respond to the gestures of the user but also offers inter-character narratives that give a new element to the story of Snow White and the Seven Dwarfs. 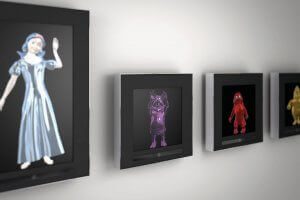 Snow White and the Seven Dwarfs (2015) by Dominic Harris

The characters feel so real even though they look so different from the film – how was this achieved?

It was achieved by faithfulness to the characters and the original animation afforded to me by the full access to the Disney Animation Research Library Archives. The story itself is a powerful all encompassing fairy tale that is instantly recognizable. The characters I animated for this art work are visually striking but very different to the original animation and this was important as it maintains a design evolution rather than a like for like realness. However, the original constantly challenges the reality of the artwork as the personalities of Snow White and the Dwarfs are everlasting and a prominent feature of this re-interpretation. The characters are true to their form and I think this helps reinforce their past film like representations, where the new design has enabled a fresh take on their style and of course the interaction really does bring them to life!

How did you choose which colour to give to each character?

Colour was an integral part of the design process. The striking metallic chrome finishing has really come to define my interpretation of the characters. Original clothing colours were initially used as colour bases to the characters but this soon changed when I decided to use colour that would define the personalities of each of the characters; the colours became representations of their mood. For example, I chose purple as the colour for Doc, as the leader of the group it was important to give him a strong colour that defines his unique character. The colour purple is often associated with power and ambition but more importantly wisdom and independence, all traits that are associated with the leader of the motley crew. The colour yellow was the chosen colour for Happy, as this colour specifically represents joy, happiness and energy and was a perfect match for the friendly dwarf.

Why did you choose to focus on portraits of the characters rather than scenes?

Portraits offer a rich and encompassing realisation of a person and I think it was important to separate the characters of Snow White and the Seven Dwarfs into their own stand alone piece to highlight their individual strengths. I don’t think the background was needed, especially in this case, as the characters did not need a placeholder to set them into a recognised visual situation. The infinite black space offers a focused and defined look into the detailing of the character and I much prefer this distinction as it highlights the complexity of the portrait. As serious portraits of beloved and well-known characters I would be honoured and most excited at the prospect of it being exhibited at the National Portrait Gallery.

How important was it for you to include the reflections in your artworks as this seems to be a common theme in your works?

Reflection is an important element to all of my artworks as it creates tension between the user and the artwork itself. Allowing the interface to be activated by movements of the body offers a challenging and performative component to my body of work. I layer this with the reflected image of the user and it becomes a vital part of art making. All the while making a comment on my own inability to make out faces, having had the condition of ‘face-blindness’ for many years. This drives me to create works that can offer new and unique reflections of the human body and face. The chrome finishing of Snow White and Seven Dwarfs in particular offers an inimitable reflection of the human face and gestural actions. The characters unique movements and self-awareness create different reflections, as they are of different shapes and sizes.  I enjoy the reflection of Happy the most, as his protruding rounded belly, holds the reflection of the viewer as he laughs and jiggles to entertain, causing a stretched and large user reflection.

Which of the characters is your favourite? Why?

Working with these characters in such intimate detail aided in the re-discovery of their unique characteristics and attitudes.  As history has shown, all of the characters have become much loved by all. However for me there are two characters that stand out as my personal favourites.

The first is Snow White, a beautiful and graceful young woman. She stands tall, elegant and proud.

The second is Grumpy – I think everyone can associate with some of his behaviours – his sceptical and suspicious demeanour leaves his mood to be quite pessimistic. But even in a constant state of annoyance, he still maintains an alluring love-ability about him. In the work, if you watch close enough, you might even see a shy smile as he pretends to ignore you. He is my personal favourite as he is a real reflection of human emotion and behaviour.