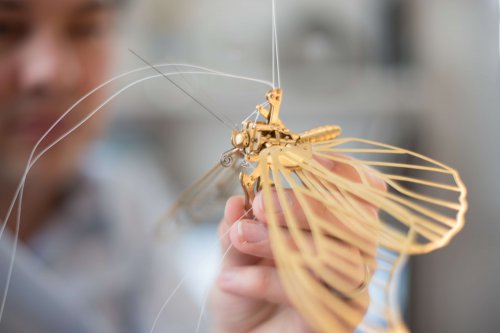 We are proud to present a truly unique collaboration between Dominic Harris and Oliver Smart. Their first encounter in 2014 – where they talked initially about their respective works interrogating nature and movement – developed into one of the most ambitious collaborations either artist had ever undertaken: creating a puppet butterfly. 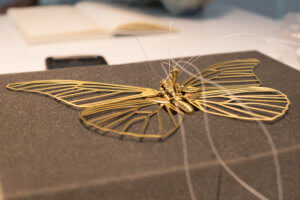 What has lead to this unique collaboration?

Dominic Harris: Meeting Oliver Smart was a chance encounter. He is one of the most talented puppeteers, and with him I have continued my Flutter series in a way that I could never have done on my own. Our shared passion was as much about imbuing a real life and spirit within an otherwise inanimate object as it was pushing the boundaries of our respective practices.

Oliver Smart: On meeting Dominic, I knew that we would collaborate on something incredible. I am drawn towards objects which give the viewer acknowledgement of their presence and share its unique change, seemingly reflecting the curiosity of the spectator. I recognise that in much of Dominic’s work. 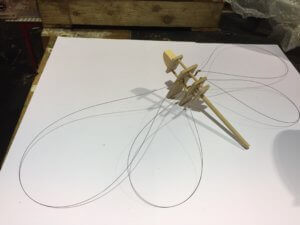 The work is obviously inspired by butterflies, why?

Oliver: I am inspired by the essence of the living things which surround me, within my work I am involved in the capturing of this essence, much like as a child I ran through the field hunting butterflies with a small net.

Dominic: To me the butterfly is a powerful emblem, offering variety of assimilations contribution to a longstanding dialogue in popular culture, film, art and literature. Over the years the butterfly has become a key reoccurring motif within my body of work. I would say that the desire to uncover the essential character of the butterfly in physical appearance and mechanical movement lies at the core of this collaboration.

Oliver: Yes, in Dominic’s work I see the relentless challenging of how to re-imagine scenes from within nature, which draws parallels to my own fascinations and work. 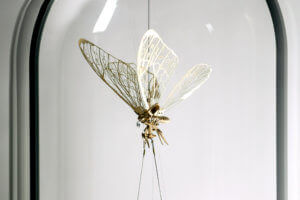 What would you say was the biggest challenge in this project?
Dominic: Uncovering, simplifying and abbreviating toward the essential movements and behaviours that define the final artwork.

Oliver: In my mind the puppet is undeniably an object and not alive but through gifting this with selective signs of life the puppeteer lets the audience suspend disbelief and accept this object into the privileged realm of the living.

Dominic: Amid the process of kinetically animating the butterfly puppet through programmed electromechanical drivers, a synthesized movement unfurled defined as a waltz: up, down, pause. Eventually, this definition served as the underpinning mantra of the movement.