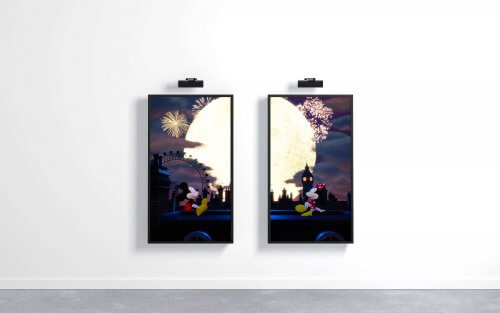 Priveekollektie Contemporary Art | Design is proud to announce an exclusive presentation of new, never before seen Mickey and Minnie by artist Dominic Harris. With the support of the Priveekollektie, Dominic was granted the opportunity to work with The Walt Disney Company in order to re-imagine and incorporate into his new work the iconic duo, Mickey and Minnie Mouse. In celebration of this year’s significant 90th  anniversary of these iconic characters, who have brought joy to the world since 1928, Dominic Harris has created this interactive digital artwork to be launched for the first time at the contemporary art fair Art Miami in the United States. This piece of art takes inspiration from the playfulness of the characters and can be seen at booth AM213 this December.

Playful, charming, cheeky; three words which perfectly capture the essence of Mickey and Minnie Mouse. These same attributes serve as the foundation upon with Dominic Harris own witty reinterpretation of the iconic duo is developed.

Harris pays homage to these two iconic Disney characters by reinterpreting them through interactive means. Whilst maintaining the greatest fidelity to their heritage, he simultaneously imposes his own modern narrative of jealousy, admiration, and self-awareness — attributes he views as references to the social media connected society about us.

The artwork explores an ever-evolving love story between the two protagonists, a romance that has spanned 90 years. Synonymous with Harris’ artworks, the role of the viewer is challenged — with the viewer becoming an antagonist within the scenes. To the frustration of Mickey and Minnie, the viewer acts as a distraction, interrupting their love story by stealing the attention.

Harris plays on the ambiguity in the characters’ realness and self-awareness. Whilst they physically exist within the confines of their artwork screens, and are very much aware of their constrained environment, Mickey and Minnie are also equally cognisant of the viewer and the external environment about them. Ultimately, the viewer becomes the third subject within these living portraitures.

This interactive engagement is pivotal to the artwork, with the viewer’s presence and touch acting as the catalyst for unique interactions and character narratives that see Mickey and Minnie break the ‘fourth wall’ of their environment. This separation between the virtual and real worlds is further eroded when the viewer uses their own cell phone to text message the characters, who react on screen by reading he message and responding accordingly.

This piece differs from Harris’ previous interactive works as they are able to demonstrate an environmental response. The characters reorganise the world around them and interact accordingly with the viewer on a more personal level. The viewer is an active protagonist in their story, which see Mickey and Minnie break the ‘fourth wall’ of their environment. You can interact with the artwork by sending a simple text message with your phone, which the characters will react and respond accordingly.