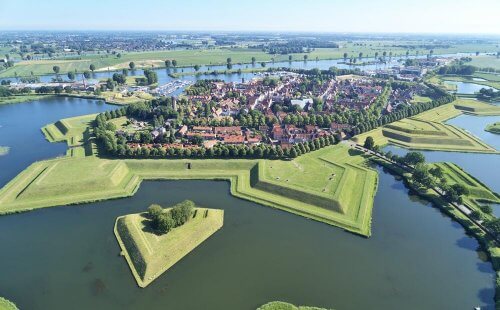 Heusden: one of Europe’s most beautiful star cities

They’re scattered all over Europe but their perfect geometrical beauty can only be fully admired when seen from above.

Like snowflakes viewed through a magnifying glass, there’s a dazzling fractal-like quality to the neat, intricate way they’ve been laid out — just that we’re not talking here about natural wonders.

It’s not a coincidence that some of its best and most magnificent examples cluster in places such as the Netherlands and the Rhine Valley, fault lines between warring empires.

Military engineers such as the Frenchman Sébastien Le Prestre de Vauban and his Dutch rival Menno van Coehoorn elevated the fortification of cities almost to the category of art.

Successive changes in military technology rendered many of their “star cities” obsolete, but since many of them had by then become civilian settlements, this eye-catching approach to urban planning was not lost to time.

Completed in 1597, Heusden can boast today of its impressive, neatly arranged bastions thanks to an award-winning, 40-year-long reconstruction project.

By the 19th century, this North Brabant town’s original fortifications had all but crumbled away. However, starting in the 1960s, local residents led a successful campaign to restore Heusden to its former glory. A 300-year-old map was used as a blueprint to turn the place into a beautiful period town that pre-pandemic was getting hundreds of thousands of visitors every year.

Visit our Illuminate exhibition in Heusden.