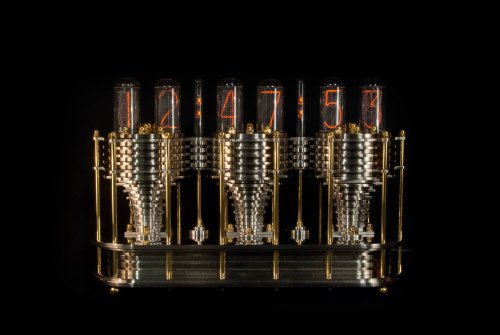 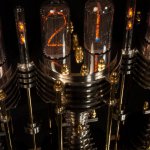 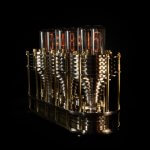 With “TIMEBASE” Smeenge has sculpted the progression of time into a dynamic object: a timepiece. Smeenge designed this timepiece inspired by instrument makers of bygone eras, and in doing so expressed his devotion to the trade of fine mechanical craftsmanship. It is this craftsmanship that gives context to the object. The timepiece is of stellar build quality, with finesse usually only found in fine mechanical scientific application. The devotion needed to conceive the instruments needed to peer ever farther into the universe, deeper into the molecule and in this case keep time (which is a central aspect in each and every field of science) is an aspect of creation that Smeenge considers paramount. Besides that, the aesthetics of” Timebase” go beyond the contemporary approach to instrument making. In working with natural phenomena as a subject throughout his career Smeenge adopted a stylistic language that reflects the formal language of nature itself. Nature is saturated with natural constants of which ‘Phi’ is – in a formal sense- omnipresent. Implementing the aesthetics of Phi, the ‘Golden Section’ into his designs is Smeenge’s contribution of respect to nature itself and the science of studying it.

Additional information
We use cookies to ensure that we give you the best experience on our website. If you continue to use this site we will assume that you are happy with it.Ok